Are the Current Healthcare Reforms Stealing a Smooth Flow of Revenue for your Practice? 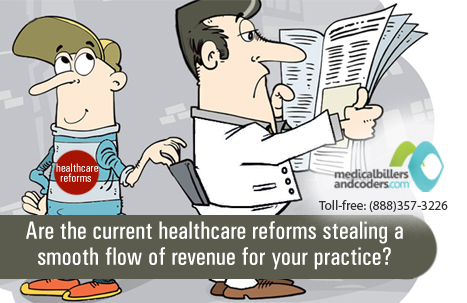 Ever since the Patient Protection and Affordable Care Act ( PPACA) or shortened to ACA, and popularly known as the Obamacare health reforms, kicked in March 2010, there has been much discussion and debate on whether this has benefited or have caused setbacks to the reimbursements earned by physicians. The reforms were initiated to promote and lower healthcare costs and increase the quality of patient care. Moreover, the healthcare reforms also initiated a decision whereby many of the uninsured Americans would now have to be insured or risk financial penalties. A study in 2014 stated that nearly 9.5 million adults have recently become insured under the Affordable Care Act. This means that physicians should be seeing many more footfalls and an increase in reimbursements. But is this the ground reality?

The healthcare reforms seem to act like a two-edged sword according to most physicians. Further, Medicare reimbursements would also be linked to patient satisfaction and a host of other measures that would be used to calculate reimbursement rates. Most hospitals depend on Medicare reimbursements for a large portion of their revenues. Two payment systems were established with the aim to directly tie reimbursement to performance: value-based purchasing and bundled payments. However, these have not come without their pitfalls and instead of helping increase the smooth flow of revenue, has caused physicians to suffer a setback in some areas.