Medical Billing and Reimbursement Challenges for Physicians in 2015 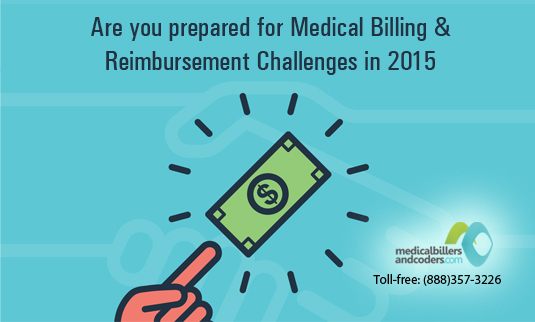 Medical Coding Will Get Even More Complex with ICD-10

The new ICD-10 coding rules have only caused more distress to physicians, whose personnel expenditure has only increased with the extra training requirements of their in-house medical billing departments. In a physician’s survey conducted during September, last year, more than 50% of the participating healthcare delivery professionals have admitted that the new coding system would substantially increase their administrative and ancillary costs, thus affecting their annual revenue. Whereas, 38% agreed that ICD-10 would result in physicians facing more penalties and liabilities.

Since 2012, there has been a 16% increase in the number of healthcare organizations transitioning to the EHR system; and as is the fact, annual cost of maintaining an EHR system has observed to be roughly $9600 and $2000 more for a cloud-based system. And these are ancillary costs that are in addition to the productivity losses many physicians claim to be facing today.

In a recent Medical Economics survey, it was revealed that over 70% of medical practitioners feel the EHR is too expensive to prove beneficial to the business and that they would rather prefer the traditional system of filing; especially considering the system’s inefficiencies and underperformance they have experienced so far.

ACA to Take a Huge Toll on Reimbursements

The massive shift from fee-for-service reimbursement model to today’s value-based payment models continues to put a large portion of industry practitioners under the risk of not getting paid for their services in due time. According to the ACA, physicians are likely to be penalized 1.5% on their Medicare bills, if they fail to take part in the PQRS. Shocking statistics from the Practice Profitability Index denote that 49% of doctors in the country are experiencing steep cuts in their annual profits, owing to the ACA requirements.

Industry experts anticipate that ACA will continue to pose reimbursement challenges to physicians, and healthcare providers have increasingly started resorting to medical billing services, as their first step toward avoiding revenue losses due to frequent claim denials.

The HIPPA audits that started in October 2014 will continue until June, this year. Out of the 350 healthcare institutions that were asked to submit patient records for verification, about 150 are expected to be thoroughly audited. Reports imply that since the last six years, almost 30 million patient records have been affected as a result of HIPAA violations. This year, depending on the severity of violation, physicians can anticipate a fine of up to $50,000. And that’s not just it; add to that the breach of trust a patient would experience in the light of these violations.

In light of the above mentioned challenges, several medical practitioners have turned to medical billing services to help ascertain accurate claims and to secure timely reimbursements. If you have been a victim of consequences and have been experiencing a substantial decrease in your annual revenue, then maybe it is time for you to outsource your revenue management services to expert medical billers and coders at MedicalBillersandCoders.com