Medical billing reports are a key barometer for understanding what’s going on in your medical practice. Without good reporting, it’s difficult to determine whether your practice is making money or not.

Monthly reports can show you how your medical practice is performing on important revenue cycle metrics, whether claims are being paid in a timely fashion and how well insurance carriers are paying you for key procedures, among other things.

Accounts receivable or A/R is a term used to denote money owed to your practice for services you have rendered and billed. Any payments due from patients, payers, or other guarantors are considered A/R. One common measurement of A/R is “days in A/R,” which is calculated by dividing the total A/R by the average daily charges for the practice.

Dividing the A/R in each bucket by your total A/R gives you percentages to gauge ongoing collection performance:

Monitoring the percentage of total A/R in each aging bucket, every month — and comparing it to prior performance in other periods — is something every practice should do.

The lower the percentage, the better. It’s represented in both a dollar amount as well as a percentage.

Each AR report can be formatted differently and their appearance may vary. The aging buckets may not look the same in all reporting styles. Some can carry out to 180 days or even 360 days, but they still provide all the same information.

What the AR report track?

The A/R Report breaks down claims based on the number of days they’ve been in receivables (in other words, the number of days they’ve been unpaid). Most claims, take an average of about a month to get paid. This report allows you to identify potential issues from a high-level view, while the follow-up reports give you a close-up look at where the issues might be stemming from.

What are Some “Red Flags”?

Appeals – which may take months to resolve.   There could be multiple appeals, leading to a lot of insurance balances. You’re still constantly working those claims, but they show up as outstanding. So your percentage and amount due may continue to increase but that may be OK.

Is your practice slow to refund patient credit balances? This could influence patient AR. Common examples of such a credit balance would be when a patient paid a co-pay when they shouldn’t have, or they paid their bill twice.

Patient AR should always be run according to when the patient becomes responsible.

Insurance reports should always be run by the date of service. This will give you a true accounting of how long the insurance takes to be paid.

One last thing you’ll see on the report is a breakdown of the individual insurance companies. This gives you a good indication of which insurance company owes the practice the most money and which companies your practice should focus on to recover unpaid or denied claims. 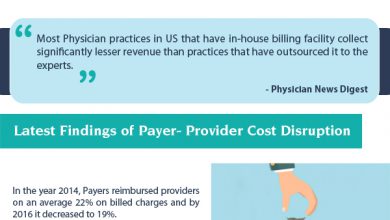 The True Cost of Medical Billing and Coding Services

How Can Outsourcing Help Better Position Your Practice for Pay-for-Performance?