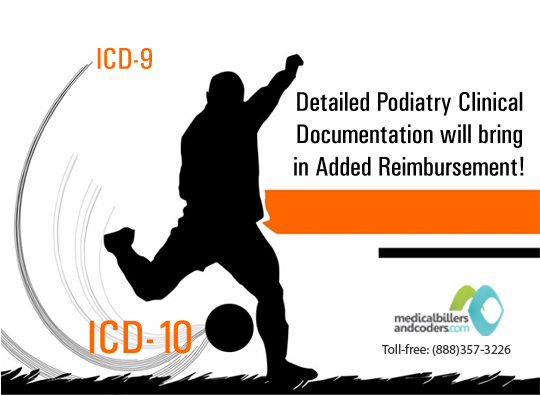 With ICD-10 coding, documentation of clinical information will get better documented, especially regarding the patient’s health condition. Further, ICD-9 had only 13000 codes and could not keep up with the newly developed procedures and advances in medical technologies. The ICD-10 coding system introduces 68,000 codes. In podiatry coding, nearly one-third of the ICD-10 codes match the ICD-9 codes, and the exception is the introduction of laterality or if the right or left side of the anatomy has been affected. Moreover, the data now documented includes:

Certain changes to be aware of when employing the ICD-10 coding for Podiatry, which will affect podiatry billing and thereby revenues, with respect to specific areas are:

Some of the top 10 podiatry ICD-9 to ICD-10 codes that coders and billers need to pay attention to which have further expansion codes and require physician’s crucial documentation are:

Thus if physicians along with coders and billers are to bring in the added reimbursements given the changing healthcare reforms and ICD coding transition, then putting their best foot forward using detailed clinical documentation, is the way to go!