Medicare Payment Cuts to Cause Challenges for Doctors in 2015 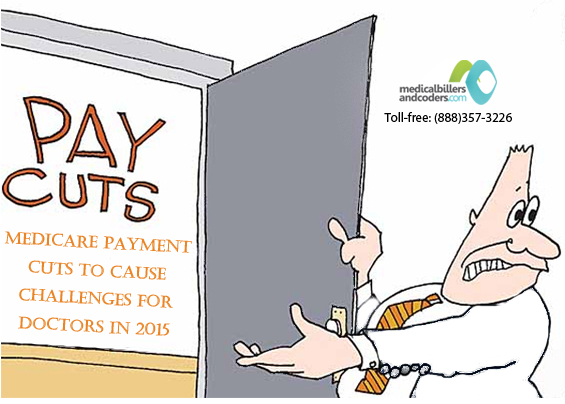 Medicare payment cut is scheduled to hit physicians starting 1st April 2015. If the Senate doesn’t act, physicians will have to face a 21% cut in Medicare payments which will not only affect patients’ access to care but will also lead to revenue challenges for medical practices.

There are many physicians in the US who depend heavily on Medicare business and this 21% fee reduction has made them quite anxious. As per reports, the pending 21% fee cut can be delayed by Medicare officials for 10 working days after 1st April 2015. However, after 14th April, physicians will have to start facing reductions.

On an average, Medicare pays approximately 80% of what private health insurance companies pay to the doctors. Congress passed legislation in 1997 and said that if it will be unsuccessful in slowing Medicare’s growth rate to match GDP, Medicare will start reducing what it pays to the doctors. For more than a decade, efforts to stem Medicare’s growth rate have failed. Payment rates have remained unchanged for all these years because Congress kept postponing the required fee reductions by passing legislations. For this year, it has April 1 to come up with legislation or else doctors treating Medicare patients will have to face a 21.2% average fee cut.

If the fee cut is implemented, doctors will be in for a bruising financial year. They will not just lose 21% of Medicare payments but also 43% of Medicaid payments. Due to less payment, doctors might start attending less Medicare patients, causing trouble to poor and senior citizens in finding a good doctor.

Pay Cuts to Affect Doctors in 2015

At a time when doctors are already struggling to implement EHRs, dealing with stringent measures to improve care quality and preparing for ICD-10 changes in Medicaid and Medicare payment formulas will increase pressure on them.

A two year reimbursement bump under the ACA that pushed payment 40% or more will expire in 2015. This will also be a big pay decrease that physicians will have to face under Medicaid program.

For 2013 and 2014, family physicians, PCPs or internists who treated Medicaid patients got reimbursed to the higher level of Medicare health insurance program for elderly patients. However, this pay increase will expire in 2015, impacting physicians who increased number of Medicaid patients as a response to similarity with Medicare payments.

How is Outsourcing Helping Physicians?

Many physicians across the US are outsourcing their RCM and billing needs to companies like MedicalBillersandCoders.com. They are relying on the experience and expertise of companies like MBC to sail through revenue disruptions caused by annual payment cuts. Outsourcing has helped them ensure error-free, timely claims submission and payments.