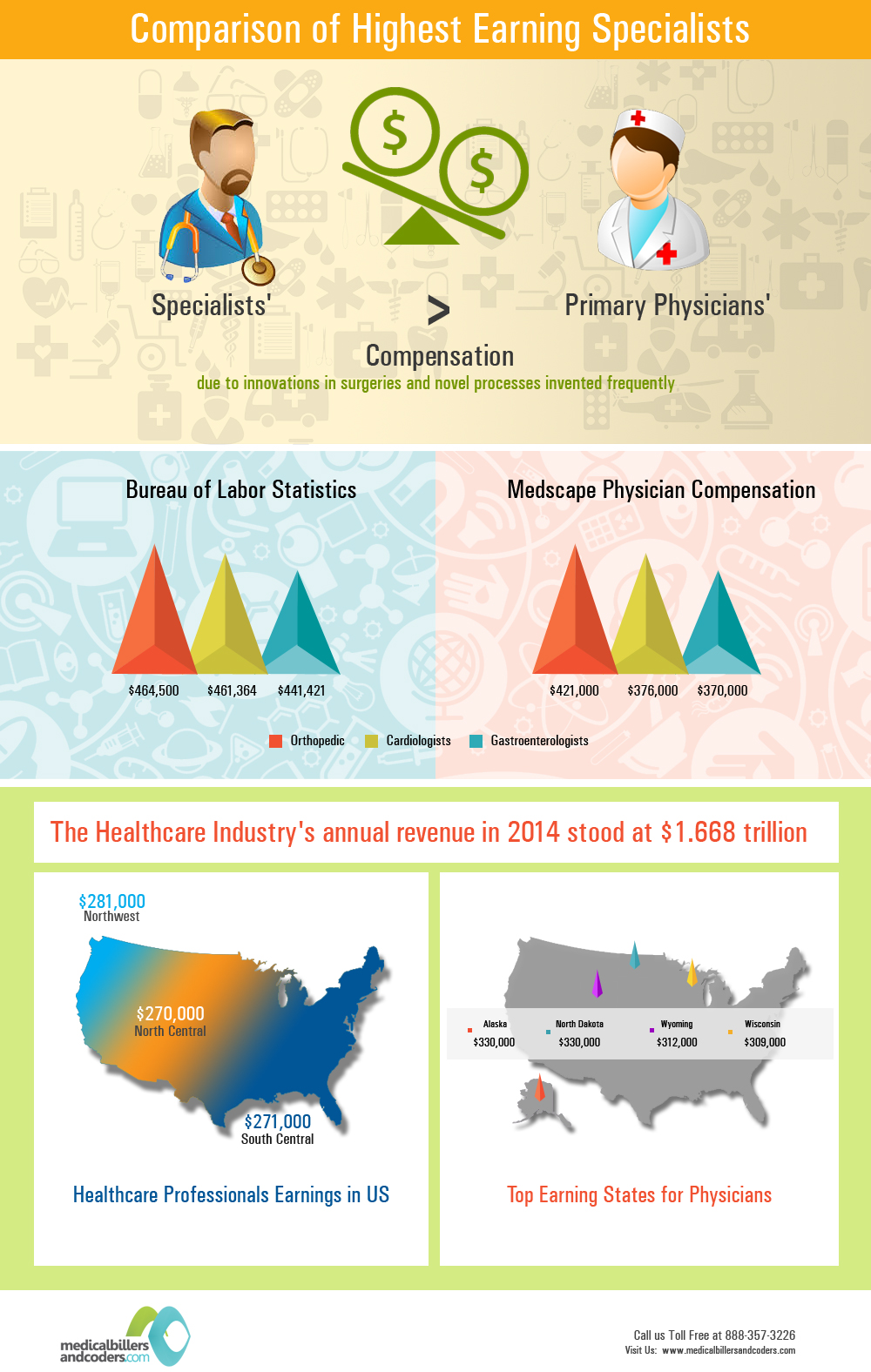 One of the highest paying professions in the United States is that of healthcare professionals. However, for medical billing purposes, it is often important to understand the burgeoning fields/medical disciplines which are on the rise and garner the maximum revenue.

It has been observed that a specialists’ compensation is higher than that of a primary physicians’ due to innovations in surgeries and novel processes invented frequently.

As per the Medscape Physician Compensation Report, 19,500 physicians in 25 specialties were surveyed upon in the first 3 months of 2015. Specialists topped the list with an annual average earning of $284,000 a year and primary care physicians earning $195,000 a year. The highest average compensation in a year was for orthopedics who earned an average of $421, 00 a year (being more physically demanding), followed by cardiologists ($376,000) and gastroenterologists ($370,000). For non-patient care activities (witness duties, speaking engagements and product sales) as well, orthopedics earned the highest, average being $29,000, followed by urologists, plastic surgeons and dermatologists ($26,000), and neurologists ($24,000). The increase in average salaries from year 2014 to this year was seen in infectious disease physicians (22%), pulmonologists (15%), and pathologists and emergency medicine physicians (12%).

According to ‘Modern Healthcare’ Physician Compensation Survey, orthopedic surgeons earn an annual average of $522,659, topping the list in compensation along with cardiologists ($491,126) taking the second slot.

As a slightly different indicator, the ‘Medical Group Management Association’ states that orthopedics earn anywhere between $469,000 to $714,000 a year, followed by neurologists who’s average compensation is around $702,000, with cardiologists taking the 3rd place with $681,000 average salary.

A neurosurgeon may make $580,000 in Maryland, but may make $645,000 is South Carolina (Report: Doximity). Similarly, an anesthetist would earn 61% more if he/she moved from Massachusetts to Wisconsin.

According to Bureau of labor Statistics, in 2013, surgeons were compensated the best in states like Arizona ($241,710), Maryland and New Jersey. Obstetrics -Gynecologists commanded the best average salaries in Indiana, Mississippi ($237,080) and Oregon ($242,300). Anesthetists earned the highest in District of Columbia and six other states; while dentists earning the most in Wisconsin ($252,390) and Vermont ($215,410) a year.

As per the Medscape report, self-employed specialists made an average of $329,000 a year, whereas employed earned around $258,000 a year. So was the case with self-employed primary care physicians who earned $212,000 averaging a year whereas employed earned around $189,000 a year. Also, male specialists (annual average: $284,000) and physicians are paid more than their female counterparts ($215,000). This is mainly due to women either working lesser hours, or working in a different specialty like pediatrics and primary care. Only 9% of women are orthopedic surgeons, 12% are cardiologists and 14% are gastroenterologists.

In all, US physicians make a healthy living and are satisfied with their careers. While 64% would again choose medicine as a career, 45% said they would choose the same specialty and24% are in agreement with the same practice setting (Medscape Physician Compensation Report 2015).