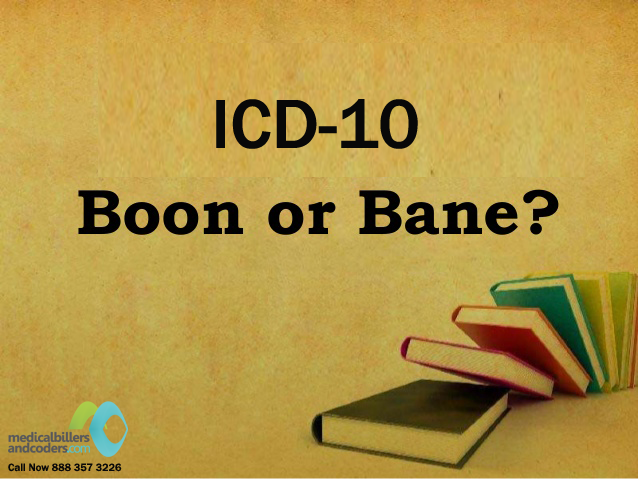 The ICD-10 coding system, since its inception, October 2015, has so far unfolded without a hitch. Although, frustration levels were high during the initial days, yet those practitioners who had already laid the ground, slipped into a comfort zone for the medical coding and billing practices, by the month end.

ICD-10, a boon or a curse, will depend on the practicing physicians and how prepared they were when the ICD-10 coding and billing system was enforced. But, for a physician, whose primary focus and care is the treatment of the patient and finding advancing methods of treatment to help patients with certain specific disease, then ICD-10 can be seen as a boon, not just to me, as a practicing physician, but to the entire medical organization, including healthcare providers, vendors, pharmaceutical companies, etc.

The first thing that strikes you is the increased number of codes. This increase from 14,000 ICD-9 codes to around 68,000 ICD-10 codes is both a boon as well as a bane.

Boon: More specific codes can now bring in more specifics into the coding system and help the research on medical treatment to be more accurate.

Bane: The coding process now becomes more complex. For even a single minor incident like an ankle twist, more number of codes will need to be added.

Boon: Although, for practitioners, it may not be a directly related advantage, but given the requirements for specificity of lateral coding, coding practices will now be more stringent and help deter fraudulent billing. But ICD-10 along with the healthcare reforms, and the payment models being incorporated like the value based payment and bundled or episode based models, will  encourage physicians to expand their contact list thereby operating well beyond the usual four walls of their practice, and bring in more accurate payment  of new procedures, thus bringing in more revenues than before.

Bane: The granularity for certain impossible situations could lead to a loss of productivity and time, given that more detailed documentation for coders will now have to be included by the practicing physician, thereby leading to less number of patients being attended to at the clinic

A short term delay in claims or denied claims arising from insufficient documentation, coding errors, and increased payer scrutiny of claims could be a problem, but the introduction of ICD-10 coding and billing could also bring more financial benefits

Boon: With this new granular coding system, physicians can now accurately report the complexity of care they provide. Earlier, due to many procedures being coded and billed as unspecified, reimbursements were low. Moreover, new procedures and cutting edge technologies could not be accommodated in the ICD-9 coding and billing system. But now these procedures can be billed and physicians can be well compensated. The medical practice can now keep updated with technology alongside.

Bane: Smaller practices will no doubt struggle with the cost of new software required to run the new ICD-10 systems, and a loss of productivity in the beginning. Alteration in payment schedules will result cash flow problems.  And with the increase in documentation which is expected to increase at least 3 percent to 4 percent of the physician’s time spent on documentation alone.

Although, administrative set-up will prove to be expensive in the beginning, but ICD-10 coding system is seen as pushing towards a more digital and transparent way of doing things.

Boon:  The shift toward electronic record keeping and being able to share with other caregivers, will present a clearer picture of what works best for successful patient outcomes. Moreover, financial benefits to physicians by allowing them to bill for more complex treatments when dealing with high-risk, sicker patients is what ICD-10 coding and billing brings in

Bane: Keeping of Electronic Health records and updated Information Technology systems will lead to more expenses in the initial phase. Moreover training the in-house staff or outsourcing the medical coding and billing part may lead to increased monitoring and co-ordination in the initial stages, but could help in the long run, but could prove expensive for smaller practices.

Depending on how you move forward and incorporate the required changes into your practice, ICD-10 coding and billing can either be a boon or a bane for your practice.