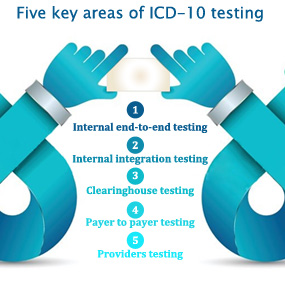 The Justify for Medicare and Medicaid Services (CMS) recently announced ICD-10 testing weeks, leading into the implementation of the new coding system in 2015. There will be three testing weeks, viz., November 17 to 21, 2014, March 2 to 6, 2015 and June 1 to 5, 2015. It has announced these testing weeks to increase confidence of physicians in the new coding system. It will also help the CMS to verify if providers are meeting the standards for performance processing and technical compliance during the implementation procedure.

These testing weeks can play an important role in boosting the confidence in the new system that will add 68,000 new billing codes. However, many practices are still not prepared to implement ICD-10. Providers are worried about integrating the expansive diagnostic codes that will be necessary for ensuring smooth billing procedures.

This new system is coming at a time when practices are already burdened with various other technology requirements. Many are worried about the cash flow disruption that will occur once ICD-10 kicks in. In order to submit timely, error-free claims using the new codes, practices will have to hire and retain expert coders. Apart from hiring, necessary system changes will also have to be done to ensure readiness for the new system.

These requirements have increased burden on practices that are already facing tremendous pressure to make the ends meet. In order to sail through reimbursement challenges post ICD-10, many physicians are outsourcing their coding and billing needs. Companies like MedicalBillersandCoders.com are offering assistance to practices in terms of coding and error-free claims submissions.

MBC has a team of experienced and well-trained coders who are prepared for ICD-10 challenges. They have been offering their services to 42 medical specialties across all the states in the US. From ensuring HIPAA compliance to assisting in implementation of an EHR system, MBC has helped providers focus on patient care rather than worrying about claims denials.

Before ICD-10 comes into effect on October 1, 2015, smaller practices, hospitals, vendors, clearing houses and payers have a huge task ahead of them. With so much to do, the idea of end-to-end testing is making providers more nervous.

The groundwork is being laid by CMS and other ICD-10 leaders to help physicians understand what they need to know and should expect during this complicated and lengthy procedure. Mentioned below are five key areas of ICD-10 testing that very critical for the migration.

To ensure smooth implementation of ICD-10, a lot of resources are being offered to practices such as, pilot programs, collaborations from pioneers in the coding field and a detailed checklist from the CMS.