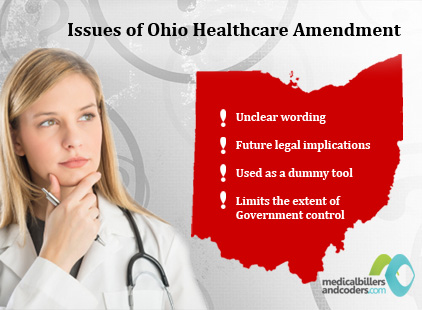 The Ohio healthcare amendment was created to give authority to the Ohio Health Care Uniform Pricing Board to administer the following:

In 2011, the Ohioans voted overwhelmingly in favor of the Healthcare Freedom Amendment, an amendment to the Ohio Constitution “to protect their freedom to choose their healthcare & healthcare coverage”.

The healthcare amendment received great support because of the several positives that it proposes for the people, which are mentioned below:

However, there is a group of skeptics who are not in favor of this amendment and point out certain issues with the amendment.

1. Unclear wording: There are many law professors who have studied the amendment and its likely effect on the Ohio law. They are of the opinion that the amendment is worded very ambiguously and therefore has the potential to threaten or invalidate a number of existing healthcare programs and practices that work towards the health & safety of Ohioans.

2. Future legal implications: A group of skeptics think that this amendment could lead to time consuming and expensive litigation’s in the future because it has been worded with ambiguous and counterproductive language.

3. Used as a dummy tool: Many believe that this amendment was chalked out to counter the federal Obama Care bill. The strategy of trying to counter a federal law with an ineffective and poorly drafted amendment to the Ohio constitution is thus not a good idea. This can have a long lasting implication in the times to come.

4. Limits the extent of Government control: Experts foresee that this amendment inhibits the state’s ability to respond to issues related to public health and regulate insurance industry to a great extent.

Despite all the above mentioned shortcomings of the Ohio healthcare amendment, Ohioans have joined the group of states that have managed to nullify some of the components of the Obama Care.