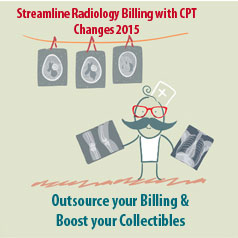 The American Medical Association (AMA) has released a total of 542 CPT code changes under the CPT coding manuals for 2015. Fifteen new codes have been introduced under radiology billing in 2015, while 23 codes have been removed. The AMA has also revised four codes for radiology billing. These changes will majorly impact vascular and non-vascular interventional radiology, breast imaging and radiation therapy.

It is necessary for practices to interpret each change and understand how it will impact their radiology coding. They need to ensure that their coders are trained in handling these changes so that any potential disruption to the cash flow can be avoided. Radiology billing will get affected if the coders fail to understand the CPT 2015 changes.

The existing codes for carotid stent placement have been revised to bring in angioplasty and radiologic supervision and interpretation.

The code for vertebral fracture assessment has been deleted and two new codes have been added under the 2015 CPT code changes.

The CMS has suggested that radiation treatment vaults should be classified as indirect practice costs rather than direct charges. It has also asked for deletion of mammography G-codes in the PFSP for 2015. These codes are currently the only authorized method for billing radiology services using tomosynthesis.

To ensure a steady revenue cycle, many practices have opted to outsource radiology billing and radiation oncology billing. Outsourcing partners like MedicalBillersandCoders.com have an experienced team onboard who are well-trained in handling CPT code changes. Coding specialists at MBC have been helping physicians from 42 medical specialties overcome revenue challenges caused by the CPT code changes every year. They provide denial-free billing and coding services to ensure maximum revenue returns for providers.