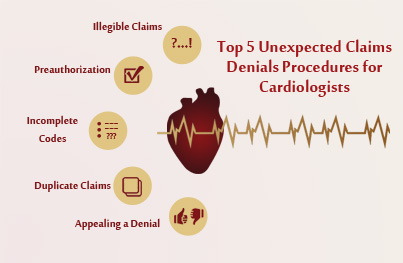 According to the industry reports, an estimated 80 million Americans have one or more types of heart disease. The role of cardiologists becomes very challenging, keeping in mind the current state of health in the country. As there are several complexities in the job of a cardiologist, the same could be seen in cardiology billing as well. The Justifys for Medicare and Medicaid Services (CMS) estimates that 20% of the claims are denied by payers the first time they are submitted. Here are the five unexpected reasons why claims made by Cardiologists could be denied, and how to overcome them.

Even though most of the payers are now accepting electronic claims, there could be a few who are still coherent with the paper system, which requires manual submissions. As the payers would scan the paper claims into their systems, it becomes very important for the cardiology billing staff to ensure the readability and completeness of the claims forms before finally submitting them to the insurance companies.

Cardiology billing claims should be coded to the maximum number of digits for the code which is being used. This is because the best way to reduce denials is coding to the maximum level of specificity (longer the code, better is the detailing). Several billers are minimally educated and are not trained enough; therefore, it requires the presence of billing experts who are aware of the recent codes. They can code a claim in the most complete format so that abbreviated codes are identified and reimbursed properly.

Some claims are denied by payers for ‘duplicate’ billing, in their terms. For instance, if a patient was operated for the same reason twice in the same week, the appropriate code for the procedure will remain the same in both the cases. The payer can deem one of the claims as a duplicate, mistaking them for a single service. The in-house billing staff may fail to add new information to the resubmitted denial; hence the payer assumes it to be a duplicate claim. Few practitioners may also lose out on revenue if the two operations are considered to be duplicates by the in-house billers and a claim is never sent to the payer.

As per a 2011 report by the Medical Group Management Association (MGMA), only 35% of healthcare service providers actually appealed for denied claims. Cardiologists should consider deploying appeals software tools which keep a track of the progress of a denial and at the same time help streamline claims denials and appeals. Each payer may have a different timeframe for appealing denials, ranging from 45 days to a year. Billers should categorize payers as per this range and then prioritize the appeals process.

MedicalBillersandCoders.com is a cardiology billing service provider that can help cardiologists take efficient steps towards their revenue collections. Their billing experts, who are available round the clock, can help prepare a comprehensive billing solution which can improve cash inflow and curtail denials.