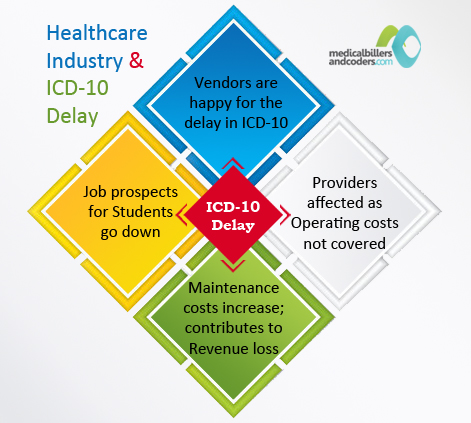 With the extended deadline of ICD-10, medical practices now have time till October 1, 2015 to train and test their capabilities with the new coding system. This delay has given another year to the providers to gear up for the new coding standard, but it has also affected the healthcare industry as a whole.

Effect of ICD-10 Delay on Vendors

Many EHR vendors have welcomed this year long delay in ICD-10 compliance deadline. This is because of the increased workload and the pressure to meet the new 2014 criteria for certifying EHR technology. Practices report to not been given adequate time for their developers to ensure ICD-10 readiness for their products. Some vendors were prepared for the original deadline though, but others remained unprepared. Since many practices use small vendor products, another year will surely help everyone come on the same page in 2015.

How has the Delay Affected Providers?

In order to prepare for ICD-10, providers had to deal with costs related to overhauling of IT departments and training coders. They had to overcome various hurdles associated with the implementation of the new coding system. Now that the deadline has been extended, they are faced with additional costs to either maintain the ICD-10 transition process or to stop and restart the process when nearing the deadline in October next year. Since these are operating costs, providers are not likely to be reimbursed for this expenditure.

Readiness of stakeholders, including payers, clearinghouses and vendors has also been one of the largest concerns for providers. The healthcare industry loses a lot of money every time ICD-10 is delayed.

The delay has affected stakeholders who had already spent thousands of dollars and sizeable time preparing for ICD-10. It has affected the health care educators, students of coding and Health Information Management (HIM) programs along with HIM professionals who were prepared for the new system. It has also affected the job prospects for students who learnt to code exclusively for ICD-10.

It is difficult to decide whether the effects are positive or negative, but the delay surely has had its presence felt even before its implementation in the healthcare industry in the US.

In order to sail through the reimbursement challenges and ensure readiness for the new coding system, many practices are outsourcing their billing and coding requirements to companies like MedicalBillersandCoders.com. MBC has a team of well-trained, certified coders and billers who are experts at maximizing revenue and strengthening the revenue cycle. By outsourcing their billing needs to MBC, physicians have been able to eliminate costs related to hiring and training coders and on implementation of health information technology.

HIM experts at American Health Information Management Association are of view that ICD-10 delay has affected the healthcare industry because the switch to a more specific and modern coding system has been prolonged too much. According to them, ICD-10 should be implemented by the next year as it will play a vital role in improving healthcare provision and healthcare reporting.