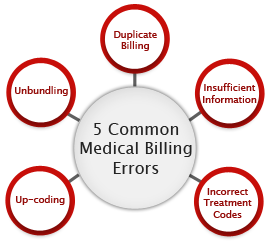 Medical Billing errors lead to denied or delayed payments. If the mistakes are not caught ahead of time, it can lead to costly fines and loss of revenue for medical practices. Common Medical Billing Errors occurred due to billing complexities and inexperienced medical professionals. According to a survey, approximately eight in ten medical bills issued by hospitals in the US contain an error. These mistakes cost thousands of dollars to consumers as well as insurance providers every year.

Mentioned below are the five common medical billing errors that can pose financial challenges for physicians:

1. The first and most common billing mistake is up-coding which occurs when a billing code is changed to one which represents a more serious treatment or diagnosis. Since this change is done improperly, it is illegal. For instance, if generic medication has been used for treatment but coding has been done for a name-brand medication, it is known as up-coding. Another example of up-coding is coding a regular office visit as inpatient care.

2. Second most common medical billing error is unbundling under which charges belonging to one billing code are listed separately. Since the items should be billed at a package rate, unbundling can make the medical bill a lot higher. If a medical practice bills multiple medical tests separately, even if the tests fall under the same code, it is a common cause of unbundling.

3. The third billing error is duplicate billing which is caused when a service or procedure is billed several times. For instance, many times patients are billed for multiple “first days” in the hospital. Commonly, this costs more than subsequent days during the same hospital stay.

4. When the coder is not provided sufficient information about a patient’s diagnosis, it results in the application of the wrong medical diagnosis code in the medical bill. This is the fourth most common billing error that can lead to claims denials due to “lack of medical necessity”.

These are the five most common medical billing errors that can lead to denied claims. These errors should be avoided because, in today’s competitive medical industry, lost payments can reduce the survival chances of private medical practices.

One of the best ways to ensure error-free coding and billing is to outsource RCM service.  MedicalBillersandCoders.com is one such billing partner that has experienced, skilled coders and billers. We are deftly handling billing complexities for more than 40 medical specialties. The company has been serving physicians for over two decades and all across the US. We help physicians in maximizing revenue and minimizing claims denials. MBC also offers denial management services and observes HIPAA compliance. Physicians can either take the entire suite of services by MBC or customize the services as per their needs.