The shortage of physicians, the health reforms, the skyrocketing costs of health care , the Medicare cuts worry and the influx of health IT into the health industry has created a bit worrying albeit a dynamic environment. Although there are critics who oppose the health reforms and suggest other methods, there are optimistic physicians as well as patients when it comes to improving healthcare even in this environment of hullaballoo that threatens to change the drudgery of the maintenance of the health care industry in the United States. According to the Bureau of Labor Statistics, a physician’s profession is much coveted and in demand and has immense growth prospects in the future which can be a good omen for the future of health care delivery in the country. A recent survey from physician search firm Merritt Hawkins revealed that more than 75% of physicians in their final year of training received at least 50 job solicitations, and 50% got 100 or more.

The reform has forced many solo and small group practices to pack up their practices and opt for employment at hospitals and along with bigger group of physicians since these have started to hire physicians. Hospitals are also hiring physicians since the number of insured in the country is soon going to rise by about 31 million and physicians in hospitals would be desperately needed to treat the patients who would inundate hospitals after the reforms take hold. Many physicians are retiring and almost one third of physicians in the country are set to retire in next few years which create opportunities for new young physicians and providers to take their place. Moreover, physicians are relieved of the non-clinical obligations while working in hospitals such as billing, extensive interaction with payers, and other administrative tasks.

Although solo practices and small group practices are slowly declining, it does not necessarily imply that new jobs for physicians are not being created. According to the Bureau of Labor Statistics, the employment of physicians and surgeons is set to increase by 22% between 2008 and 2018 and the reasons cited by the bureau are numerous. Physicians’ job outlook looks positive because of an expanding health industry, the increase in demand for the services of physicians, increased level of enrollment in medical schools and the policies implemented by the United States government to encourage the growth of this profession qualitatively as well as quantitatively.

The biggest challenge faced by new physicians is related not just to professional core issues but also to financial issues. There are numerous financial challenges and problems in the form of paying off the debt, implementing ‘Meaningful Use’, striving for the incentives provided by the government and avoiding financial penalties for non-compliance of health reform policies. Even with so many challenges and problems faced by new physicians who have just started practicing can successfully kick start their work in financially and professionally fruitful manner. However, support is available for physicians who are just stepping into this dynamic yet progressive health care industry in the form of processes that aim to maximize physician revenues and ease the problems faced by them in many departmental processes involved in running a practice or even when joining a hospital.

Whether as a physician, you work in a hospital or starting a solo practice, medical billers and coders at www.medicalbillersandcoders.com can offer you a wide range of services that will not only assist you in medical billing and coding but also facilitate services such as revenue cycle management, denial management, interaction with payers, research, consultancy, streamlining various processes for EMR or EHR implementation, and assistance in health IT implementation in this dynamic health industry. This will help you in avoiding the pitfalls faced by new physicians in the country and also assist in increasing your revenue in a lesser amount of time.

What Do Stage 2 Meaningful Use Guidelines Have in Store for Radiologists? 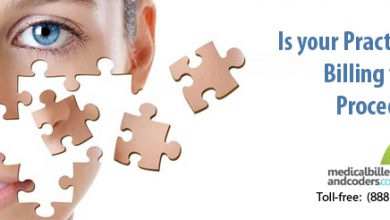 Is Your Practice Perfectly Billing the ENT Procedures?

Hospital billing and the ghost of imminent Medicare-cut impact