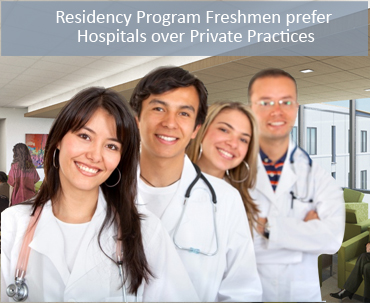 According to a report by AMA, approximately 60% physicians worked in physician owned practices in 2012. Merely 23% were in practices partially or wholly owned by a hospital while 5.6% were directly employed with a hospital.

In another report, industry experts have predicted that by the end of 2014, around 75% of newly hired physicians will be hospital employees. It is also being predicted that established doctors won’t be considering hospital employment as an option and they would prefer to run their private practice instead.

Compared to established doctors, fresh graduates from residency programs are more inclined towards hospital employment as they don’t want to experience the financial or administrative challenges associated with running a private practice. Hospital employment also gives them the required time to ensure a work-life balance.

The rate of hospital employment also varies according to the region. However, it has been found that large physician groups are taking justify stage in the US healthcare industry compared to the private practices or hospital employment. These large groups are either independent or owned by a hospital. It has been observed that primary care physicians (PCPs) are more likely to be employed by hospitals as they have lower rates of practice ownership.

Physicians can earn high compensations in a hospital-owned group; however, in the long run, these groups may not be financially sustainable. As observed, independent physician groups have more flexibility when it comes to meeting the demands of healthcare purchasers; however, the growth prospect of these groups may be limited due to the small size and limited capital investment.

Due to the increase in administrative and financial pressures of running a private practice, many physicians are becoming employees of a hospital or multi-specialty group that has a strong business infrastructure and high capital investment.

Do you also run a private practice? Are financial and administrative burdens forcing you to sell it off and become an employee with a hospital or group of clinics? If the answer is yes, you can seek assistance from a billing partner like MedicalBillersandCoders.com to sail through reimbursement challenges.

Companies like MBC have a team of skilled and certified coders and billers who can help providers get timely payments for rendered services. MBC currently provides effective RCM solutions to healthcare providers in 42 medical specialties across all the states in the US.