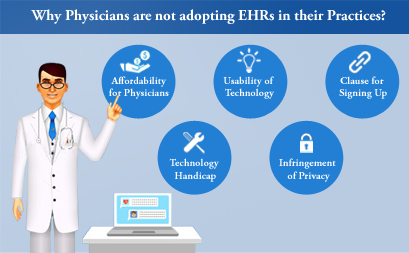 Information technology is playing a major role in every field and the government is taking pains to extend its role into the healthcare sector as well. They have chalked out various policies and spent billions of dollars in the form of Medicaid and Medicare health programs so that healthcare information technology (HIT) is used widely. However, despite the efforts electronic health records (EHR) have not gained enough momentum as expected.

On probing into the matter it was discovered that physicians who normally do not hesitate to adapt newer technology and practices are hesitant in this case owing to a number of problems. Although the technology has been in the market for a long time, till date only 25-30% physicians have actually adopted and implemented them. This is despite of all the attractive incentives that the government has been offering. There are various reasons as to why the physicians have been so hesitant.

This has been an important reason stated by the physicians. It is a fact that medical practitioners are not always good business people. However, the logic behind this issue can be based on lack of understanding the technology itself. The changing  play a contributory part too in this.

Physicians are not necessarily as technologically advanced as people from other professions. It is also not necessary that the newer generation of physicians would be more tech savvy than the older ones, especially when it comes to the administration part. Physicians are generally asked to complete the records so that the account can be coded and billed quickly. However, if the physician is not comfortable using the technology then chances are it would delay the things further as they grow lethargic in such cases.

While physicians may not be technologically advanced, it is true that they are keen on incorporating the latest technology in their work as it simply attracts more patients and work gets easier too. While many physicians were hesitant to adopt EHR, some readily agreed to the same, invested on the required equipment and tools. Unfortunately, these tools were not optimized to meet the user demands. Hence, instead of helping it decreased the efficiency of the practitioner.

This is a very valid reason for the physicians. There have been many incidents where the privacy was infringed upon. This is especially true when the vendors are from different countries. They may use the information to threaten the clients as a way of ensuring the payments. In some cases, physicians are hesitant to use EHRs as they fear malpractice claims. These fears are justified and logical. However, they can be put to rest if the federal Government comes up with a standard encryption code that can be used and accessed by everyone.

5. Clause for Signing Up

There are rules and regulations that protect the physicians who sign up for electronic health records. However, the regulations read less like protection clauses and sound more like laws that penalize the physicians for misuse of technology. For example, the use of a certified EHR in a meaningful manner such as e-prescribing; the very statement gives one an impression that the practitioner would be penalized if he or she uses it for any purpose other than this. The fear of the law automatically sets in and they grow hesitant.

The aforesaid problems are understandable and dealing with them is not at all a difficult task, provided the professionals are well aware and non-hesitant towards implementing the HIT reform in terms of electronic claims. Standard rules and regulations and standard encryption codes can do wonders. Cost being the primary factor, incentives offered will go a long way in making physicians submit their claims electronically.

Since providers don’t get much time behind administrative and billing tasks like these, outsourcing medical billing partners like MedicalBillersandCoders.com ensure RCM of your medical practice is not only streamlined but maintained on a profitable level. MBC has trained and experienced professionals aboard who strive to keep your AR age as low as 21 days.