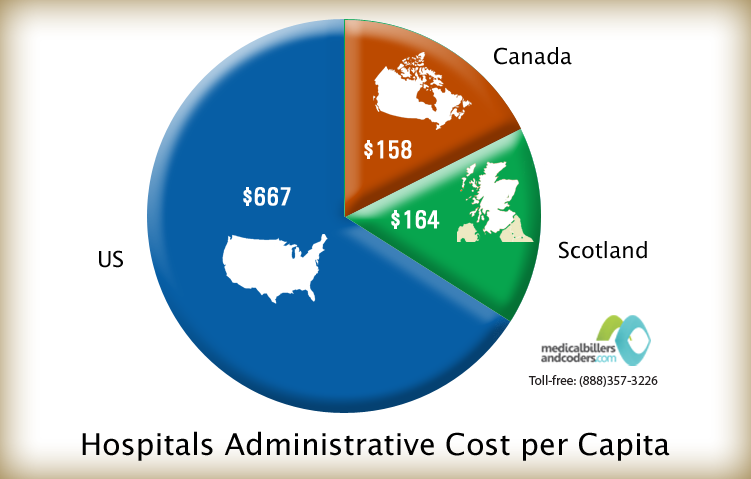 Canada and Scotland had the lowest expenses amounting to just 12%, whereas German and French hospital expenses were 20% higher than Scotland in UK and Canada. But it is still 40% lesser than US. According to the industry experts, if the per capita spending for hospital administration was reduced, the US healthcare industry would have saved more than $150 billion in 2011.

Reason behind High Administrative Costs in the US

Hospitals in Canada and Scotland receive funding from direct government grants and global operating budgets, whereas in the US, surpluses from day-to-day operations account for most of the hospital capital funding.

US hospitals also have a large number of administration personnel compared to other nations. Countries where hospital administrators have few responsibilities aside from management and co-ordination, administration alone takes up approximately 12% of total hospital spending.

How Can US Hospitals Bring Down their Spending?

Experts believe that a single-payer model in the US healthcare system will lead to administrative savings. In the US, complexities involved in billing various insurers with different payment rates, documentation requirements and rules have led to the rise in administrative costs.

There is a strong need to implement effective cost-cutting measures that will help bring down the expenditures without affecting quality of patient care. Till bureaucracy doesn’t come up with the required changes in US healthcare system, many hospitals are outsourcing their billing requirements to companies like MedicalBillersandCoders.com. Billing companies like MBC have a team of certified and experienced coders and billers who are well-trained in handling different insurance company requirements. Since their team is constantly updated with any changes introduced by the insurance companies, hospitals or private practices don’t have to worry about denied claims or underpayments. Outsourcing to companies like MBC has helped many hospitals and private practices maximize revenue and streamline revenue cycle.