Appealing denied claims is one of the important steps in enhancing the revenue of physicians and this fact is supported by a report by the U.S Government Accountability office (GAO). The report released on March 16, 2011 states that – “coverage denials occurred for a variety of reasons, frequently for billing errors, such as duplicate claims or missing information on the claim, and eligibility issues, such as services being provided before coverage was initiated, and less often for judgments about the appropriateness of a service. Further, the data GAO reviewed indicated that coverage denials, if appealed, were frequently reversed in the consumer’s favor.”

Percentages in Favor of Denial reversal

The GAO report also mentions that data from four of the six states on appeals indicates that about 39 to 59 percent of appeals resulted in the reversal of denials by insurers. Almost 10 percent of physician revenue is lost due to the lack of a proper denial management process. Therefore, the percentages are in favor of physicians if they adopt a professional attitude towards denial management and ensure that errors do not affect their bottom line.

The health reforms in the country under the Patient Protection and Affordable Care Act (PPACA) of 2010 could expand insurance cover to almost 31 million uninsured citizens. This can have a two-pronged effect on the revenue of physicians, in that, there would be greater scope of increasing revenue while at the same time, payers would find new reasons and even technical errors to deny claims. In face of such an unprecedented change in the insurance sector, it makes sense to ensure that the denial management process is set up considering the long term benefits that such management can provide.

The most common reasons for claim denials are due to a wrong diagnosis, incorrect procedure code or incorrect place of service being billed, the wrong modifier or lack of modifier being billed, the claim was billed without a provider number, denials due to policy limitation such as late filing or late appealing, a claim denied due to the prescription drug issues, or due to non authorization from a primary care physician when a specialists services are used are quite common. However, there are other simple reasons such as medical billing and coding errors or missing/duplicate information. The most avoidable of these reasons are errors in medical billing and coding which prolongs the time for receiving payment for services rendered.

The changes in ICD codes are another factor that would heavily influence the results of appeals and denied claims. The transition from ICD-9 codes to ICD-10 codes is taking place in the medical billing and coding industry which is unprecedented if not complicated in nature, The new ICD-10 codes are more elaborate compared to the older ICD-9 codes and thus increase the possibility of errors while coding. The staggering number of ICD-10 codes compared to ICD-9 (almost 9 times) can prove to be cumbersome for medical billers and coders who are not experienced or do not have proper training in the new codes. Therefore it becomes important to outsource medical billing and coding to professionals who are ready to implement such transformation in an effective manner. Complacency in this field can lead to delayed or even lost revenue for physicians and health care providers.

It cannot be denied that with so many changes taking place in the health industry such as EMR/EHR implementation, insurance policy overhaul, and numerous coding changes, there are bound to be errors in some of the aspects in denial management or in other aspects of delivering health care. However, the bottom line of physicians should not be affected just due to avoidable errors in medical billing and coding. Outsourcing the process of denial management and medical billing and coding to a responsible professional entity can make a huge difference in the revenue and the way revenue cycle management is carried out.

For access to more information about denial management, medical billing consultancy, and professional medical billing and coding services please visit medicalbillersandcoders.com, the largest consortium of medical billers and coders in the United States.[subscribe2] 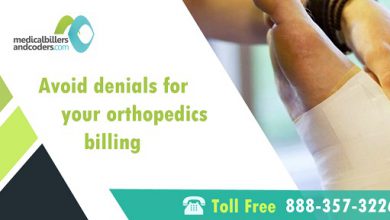 Avoid Denials For Your Orthopedics Billing

ICD-10 First Day is gone! How Stressed or Relieved are you?